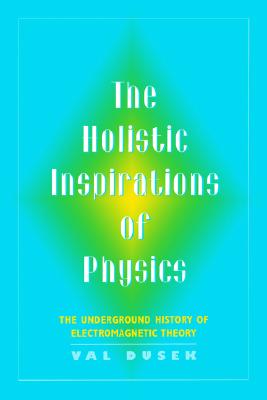 The Holistic Inspiration of Physics: The Underground History of Electromagnetic Theory

"Dusek's book is an intellectual feast where we find magic, witches, mysterious correlations, trigrams of the I Ching, forces and fields, peasants and Platonists, wild nature, primitives and sophisticates, and how they hang together." --Robert S. Cohen, professor of physics and philosophy emeritus, Boston University While many books have claimed parallels between modern physics and Eastern philosophy, none have dealt with the historical influences of both Chinese traditional thought and nonmechanistic, holistic Western thought on the philosophies of the scientists who developed electromagnetic filed theory. This is the basic question of The Holistic Inspirations of Physics: To what extent is classical field theory a product of organic and holistic philosophies and frameworks? Electromagnetic theory has been greatly influenced by holistic worldviews, Val Dusek posits, highlighting three intellectual traditions that made the development of electromagnetic theory possible: Chinese science, Western Renaissance occultism, and German Romanticism. Among the specific contributions discussed in detail are the Chinese invention of the compass and discovery of the earth's magnetic field and magnetic declination. Western alchemist ideas of active forces and "occult" influences contributed to Newton's theory of universal gravitation as action at a distance, rather than as a result of purely mechanical collisions and contact action. Dusek's wide-ranging, erudite account also delves into the philosophical concepts that were originated by women and were later absorbed into mainstream field theory. Val Dusek teaches philosophy at the University of New Hampshire. He has written many articles on philosophy and science.

Title: The Holistic Inspiration of Physics: The Underground History of Electromagnetic Theory

The Holistic Inspiration of Physics: The Underground History of Electromagnetic Theory