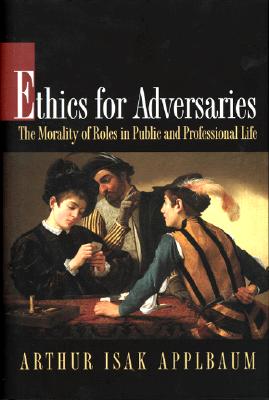 The adversary professions--law, business, and government, among others--typically claim a moral permission to violate persons in ways that, if not for the professional role, would be morally wrong. Lawyers advance bad ends and deceive, business managers exploit and despoil, public officials enforce unjust laws, and doctors keep confidences that, if disclosed, would prevent harm. "Ethics for Adversaries" is a philosophical inquiry into arguments that are offered to defend seemingly wrongful actions performed by those who occupy what Montaigne called "necessary offices."

Applbaum begins by examining the career of Charles-Henri Sanson, who is appointed executioner of Paris by Louis XVI and serves the punitive needs of the "ancien regime" for decades. Come the French Revolution, the King's Executioner becomes the king's executioner, and he ministers with professional detachment to each defeated political faction throughout the Terror and its aftermath. By exploring one extraordinary role and the arguments that can be offered in its defense, Applbaum raises unsettling doubts about arguments in defense of less sanguinary professions and their practices.

To justify harmful acts, adversaries appeal to arguments about the rules of the game, fair play, consent, the social construction of actions and actors, good outcomes in equilibrium, and the legitimate authority of institutions. Applbaum concludes that these arguments are weaker than supposed and do not morally justify much of the violation that professionals and public officials inflict. Institutions and the roles they create ordinarily cannot mint moral permissions to do what otherwise would be morally prohibited.