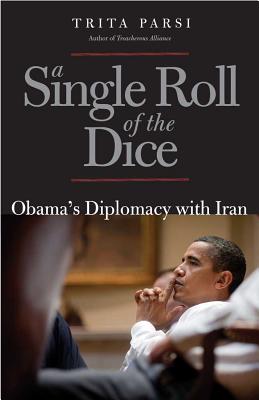 A Single Roll of the Dice: Obama's Diplomacy with Iran

Have the diplomatic efforts of the Obama administration toward Iran failed? Was the Bush administration's emphasis on military intervention, refusal to negotiate, and pursuit of regime change a better approach? How can the United States best address the ongoing turmoil in Tehran? This book provides a definitive and comprehensive analysis of the Obama administration's early diplomatic outreach to Iran and discusses the best way to move toward more positive relations between the two discordant states.

Trita Parsi, a Middle East foreign policy expert with extensive Capitol Hill and United Nations experience, interviewed 70 high-ranking officials from the U.S., Iran, Europe, Israel, Saudi Arabia, Turkey, and Brazil--including the top American and Iranian negotiators--for this book. Parsi uncovers the previously unknown story of American and Iranian negotiations during Obama's early years as president, the calculations behind the two nations' dealings, and the real reasons for their current stalemate. Contrary to prevailing opinion, Parsi contends that diplomacy has not been fully tried. For various reasons, Obama's diplomacy ended up being a single roll of the dice. It had to work either immediately--or not at all. Persistence and perseverance are keys to any negotiation. Neither Iran nor the U.S. had them in 2009.

Title: A Single Roll of the Dice: Obama's Diplomacy with Iran

Description: 0300169361 Crisp, clean, unread hardcover with light shelfwear to the dust jacket and a publisher's mark to one edge - Nice!

A Single Roll of the Dice: Obama's Diplomacy with Iran