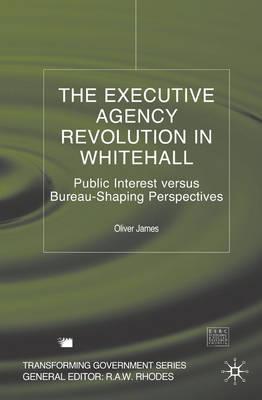 This is the first book length assessment of outcomes from the revolutionary 'Next Steps' executive agency reform in UK central government, part of the international 'New Public Management' movement. Over half of the civil servants in the UK currently work in 126 agencies and this reform has been emulated in several other countries. The 'Next Steps' reformers' 'public interest' perspective suggested improvements in economy, efficiency and effectiveness. However, extensive original analysis of budgets, performance data, documents and interviews reveals support for an alternative 'bureau-shaping' perspective from rational choice. Senior officials, keen to protect their policy work position at a time of pressure from politicians to be more managerial, passed their executive tasks to agencies. Improved economy was not achieved and efficiency and effectiveness was hampered by a lack of co-ordination or failure to 'join-up' government. Oliver James assesses the prospects for agencies in the UK and beyond and mechanisms to co-ordinate the current fragmented system.