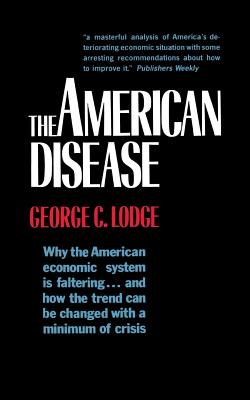 In this provacative study of the "disease" afflicting American industry today, George Lodge, a distinguished professor at the Harvard Business School, reveals the malady as a psychological disorder, characterized by a refusal to face the facts of interdependence in a competetive world; by a reluctance to confront the grave inadequacies in the operation of our great institutions--business, labor, and government; and by the fact that "leaders do not lead; those with responsibility do not fight. Timidity, born of resignation, discourages change."

Lodge begins by defining the disease through its symptoms: failing industries, stubborn unemployment, lagging economic growth, stagnant productivity, overseas competition, focus on short-term financial gain, and, perhaps most telling, the pervasive feeling among Americans that their land of plenty has become a land of want. He examines the gradually changing roles and relationships between government, great corpoations, and trade unions that are nevertheless obscure by traditional and detrimental assumptions, distrust, and a set of ideologies that are increasingly inefficient, ineffective, inconsistent, and irrelevant. And he finds the incoherence of American industrial policy exemplified by the fact the we preach the old virtues of free trade and the sanctity of the market while in actuality we pursue a strategy--including tax incentives and trade subsidies--the misshapes the free market.

Based on interviews with more than 150 leaders of the nation's institutions, "The American Disease" goes beyond diagnosis to offer logical and feasible proposals to cure this dangerous condition. Lodge suggests, for example, that the office of the United States Trade Representative be expanded and strengthened to deal with the growing pressure for protection against imports and with the confusion among our trading partners. He shows why business and labor must work together more closely in a non-adversarial way with federal and local government to determine community needs. He explains why Washington will be forced to direct the future of electric power in America, rather than leave the decisions to fifty different sets of state regulators. And he makes a number of recommendations to alter the ways in which corporations manage themselves and deal with government, and to reduce the social and economic costs that are implicit in these changes.

George C. Lodge believes that recovery from our institutional ailments is possible, and this timely and perceptive book offers a resoundingly rational course toward that crucial goal.

Description: 0814750281 Crisp, clean, unread paperback with light shelfwear to the covers and a publisher's mark to one edge - Nice!